To say the least, this year has been difficult. COVID-19 and the restrictions that have resulted because of the pandemic have certainly changed all of our lives. Many have lost and continue to lose their lives and loved ones, many have had their livelihood affected, essential workers are risking their well-being, and countless heroes are juggling working from home, homeschooling their children, and/or caring for elderly family members, not to mention the mental and emotional toll from the anxiety and uncertainty caused by the pandemic. As we are all well aware (and hopefully observing), these restrictions limit both our ability to travel and to gather in large groups, both things that academics do a lot. 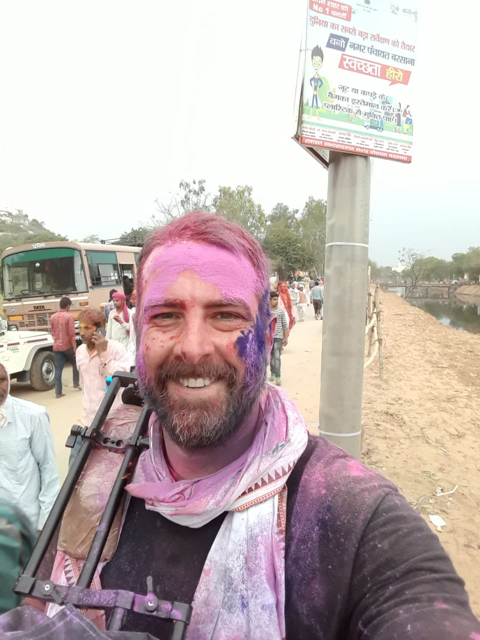 These restrictions, however, have also been on my mind because they directly affect one of my major areas of research: large Hindu festivals. Hindu festivals have been one of my major areas of research, but this academic year I began a new project, to create a series of short documentary films. With a Teaching and Outreach Grant from the College of Humanities, I focused on four Hindu festivals—Durga Puja in Kolkata, Dasara in Mysuru, Bhagavathi Theyyam in Kuttikol, and Holi in Vrindavan—gathering and editing videos that could both be used in class and made available for free online to showcase these vibrant traditions.

Embarking on a new academic genre was difficult. I had to learn about cameras, video formats, color correcting, editing and storytelling. It was a great experience, primarily because it reminded me of the frustrations and rewards that come with learning something completely new. It is always nice to be reminded of what many of my students are experiencing when they enter one of my General Education courses on South Asian and Indian religious traditions.

The Hindu festivals that I was filming all take place during the academic semester: Durga Puja and Dasara in the fall and Bhagavathi Theyyam and Holi in the spring. My courses were online or hybrid of in-person and online, and I was prepared with online content that would run during my absence, but the timing provided me with an incredible opportunity to give my students unrivaled access to the material that we were studying.

The fall festivals went as well as could be expected, an experience that is always amazing. There is little that compares with the feeling of being sandwiched so tightly within a joyous sea of humanity that you don’t even need to hold yourself upright. I was able to capture hundreds of hours of footage from the creation of clay images of the goddess and the grand pandals of Durga Puja in Kolkata and had access to the Mysuru Dasara rituals of the royal Wodeyar house and in the temple to goddess Chamundeshwari.

Using social media apps, based on the advice of students, I was able to post footage of the festivals each night. On Instagram and Snapchat, my students could watch the rituals, processions and pomp, take quizzes on what they saw, and ask questions that I could answer in real time! Of course, this couldn’t replace actually being there, but it added another dimension to the course, and hopefully planted within them a desire to go experience it for themselves.

The environment was quite different when I left for the spring festivals. It was early February, and information about the potential COVID-19 pandemic was beginning to circulate. I packed my facemasks, but, to be perfectly honest, I didn’t understand the gravity of our impending reality. My first stop was nine days in the small village of Kuttikol on the Malabar Coast in the northern portion of the South Indian state of Kerala, where I would video performances from the Kuttikol Bhagavathi Theyyam.

As I read more and more about the flood of confirmed cases and the rising death tolls, the isolation of the small village made it all seem very far away. That changed as I left Kerala for Vrindavan in the North Indian state of Uttar Pradesh. Vrindavan, which has a normal population of around half-a-million, swells as people from all over India and abroad descend on the city for Holi, the well-known color festival. While the city was bursting with the sights, sounds, and smells of the festival, it was also abuzz with anxiety about the virus. Various functions of the festival began on March 2, and the crowds swarmed. Most didn’t wear masks, and those that did—myself included—usually ditched them midway through the day’s festivities as a thick coating of colored powder made breathing extremely difficult.

When I spoke with family back home, I tried to allay their fears by pointing to data that suggested that India was one of the safest places in the world to be during the pandemic (maybe it wasn’t). By the end of Holi, there was no getting around it: large crowds were unsafe and COVID-19 was truly a global pandemic. Some Hindu celebrants replaced the traditional effigy of the demoness Holika, which is burnt to recreate the deity Krishna’s defeat of the villian, with an effigy of a COVID-19 demoness. Before the biggest days of the celebration (March 9 & 10), Narendra Modi, Prime Minister of India and staunch supporter of Hindus, and ministers from his government discouraged people from going out to celebrate Holi in large groups.

Despite being the most important days of the festival, I, too, limited my exposure only going out to capture a few minutes of footage from a safe distance, which didn’t keep me or my camera from being pelted with colored powder and drenched with colored water. When I arrived at the airport to come home on March 12, the world was different and everyone was wearing facemasks. Two weeks later, all of India was entirely locked down for 21 days, affecting the celebrations of important Hindu Spring festivals, like chariot festivals, the birthday of the deity Rama, New Year’s, and Nyepi, that followed Holi.

Like people around the world who are forced to adapt to the realities of our current circumstances, Hindu practitioners have created various rituals to help ward-off the virus and to promote social distancing by offering new approaches. As many of us fulfill our need for socialization in virtual spaces, like Zoom happy hours, Hindu festivals will also be forced to adapt if the pandemic continues. But it will be interesting to see if and how the full experience of crowded religious festivals can be recreated in virtual spaces. Perhaps we are not far from the day when we no longer need to travel to India to attend these festivals but can experience them from anywhere in the world. Until then, however, I look forward to the return of normalcy and the next time that I can be sandwiched within a crowd at a festival in India.